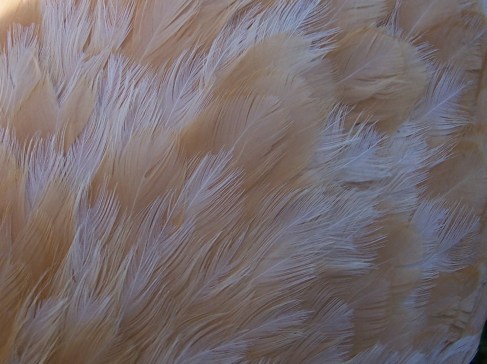 “Hope is the thing with feathers, that perches in the soul, and sings the tune without words, and never stops at all.” Emily Dickinson

“Men think highly of those who rise rapidly in the world, whereas nothing rises quicker than dust, straw and feathers.” Lord Byron

“He thought of all the living species that train their young in the art of survival, the cats who teach their kittens to hunt, the birds who spend much strident efforts teaching their fledglings to fly–yet man who’s tool of survival is the mind, does not merely fail to teach a child to think, but devotes the child’s entire education to the purpose of destroying his brain, of convincing him that thought is futile and evil before he has started to think . . . men would shudder, he thought, if they saw a mother bird plucking  the feathers from the wings of her young, then pushing him out of her nest to struggle for survival–yet that was what they did to their children.” Ayn Rand

“He will cover you with his feathers, and under his wings you will find refuge; his faithfulness will be your shield and rampart.”  Psalm 91:4

I say let the world go to hell, but I should always have my tea.
Have patience with all things, but chiefly have patience with yourself. Do not lose courage in considering your own imperfections, but instantly set about remedying them—every day begin the task anew.
Why does he not seem happy about the holidays?
After Lieutenant Fred Crenshaw’s young wife dies in childbirth, secrets are exposed. At the funeral, the Crenshaw and Weldon families confront mortality but also find hope in young love and news of a child brought back into the Crenshaw fold.
I called to an owl one night recently. He called back from deep in the woods so I called again and so did he only closer now. I wondered why he would answer my very human sounding imitation of his language. And then in the darkness he flew just over my shoulder and perched outside of my door. For some reason I screamed and he flew away!
I met my cousin for the first time two years ago. He’s an older gentleman (88). When I sent him and his wife a card he wrote me a letter and we’ve been happy pen pals ever since.
We had no plans to get another BIG dog but this little angel decided to move in. What could we say to a face like that?
November 🧡